The Insurance School (Non-Life) of JAPAN

International cooperation in the field of insurance first drew world attention in the mid-1960s, when the Committee on Invisibles and Financing related to Trade (CIFT) under the United Nations Conference on Trade and Development (UNCTAD) put forward its recommendations in October 1966. It recommended that developed countries make an active commitment to international cooperation with developing countries in the field of insurance and reinsurance, including technical assistance, training of human resources and exchange of information and data. In 1968, the recommendation was adopted by the 2nd meeting of the UNCTAD held in New Delhi, India and was readopted by the 3rd meeting in Santiago, Chile in 1972.

Coincidentally, in the 1960s, the East Asia Insurance Congress (EAIC) started talks as to how they could best develop regional collaboration in the field of insurance, including training of human resources. In particular, at its meeting in Seoul, Korea in 1968, the discussion was highly motivated and turned on the idea of founding an Asian Insurance Research Centre and an Insurance Training Program. However, this plan was premature given the circumstances of the time.

In light of the recommendations adopted by the UN organization and the discussion developing locally in the East Asian region as well, the Japanese non-life insurance industry started extensive studies as to how it could effectively disseminate, specifically to East Asian insurance people, knowledge and expertise that it had accumulated through its own business operations in Japan.

A draft plan to launch a permanent educational program for insurance practitioners in the East Asia regions was unanimously approved by the members of The Marine and Fire Insurance Association of Japan (renamed the “General Insurance Association of Japan” in 2003) in October 1971. The program, entitled the Insurance School (Non-Life) of Japan, started in July 1972 and has been jointly organized by the association and the institute every year since. 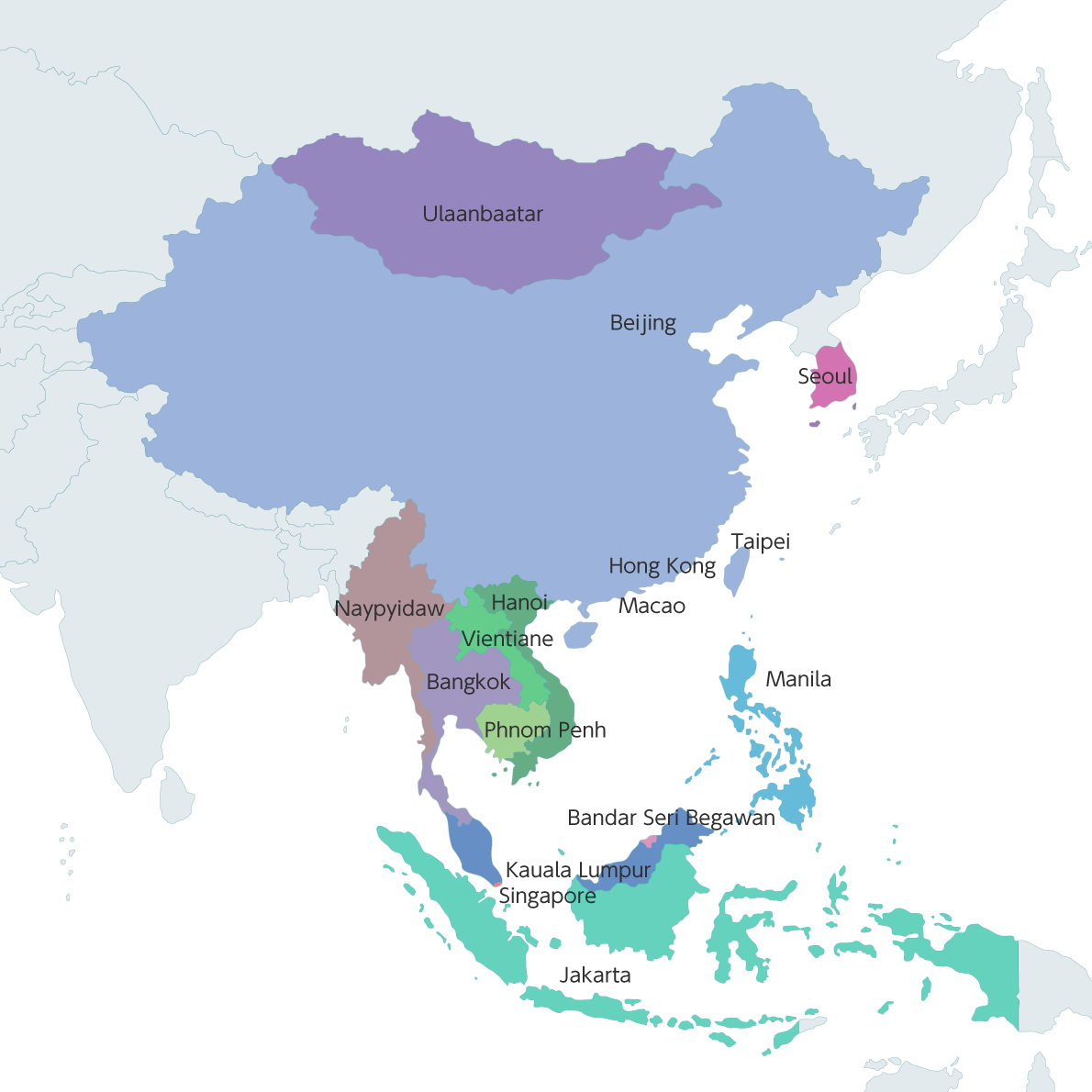 This is an educational and training program for insurance practitioners in the East Asian regions, which has been held in Tokyo every year since the commencement of the ISJ in 1972. The name of the course was changed to "General Course" when the Advanced Course was created in 1991.
Currently, the course is aimed at giving participants insights into today’s market issues by providing an overview of the current market conditions, insurance products and practice, and management of each risk in the Japanese non-life insurance industry.
Since its inception in 1972 until the 46th session in October 2019, as many as 1,553 participants from 16 regions had graduated from the course.
Due to COVID-19 related travel restrictions, the 47th session has been postponed to 2021. 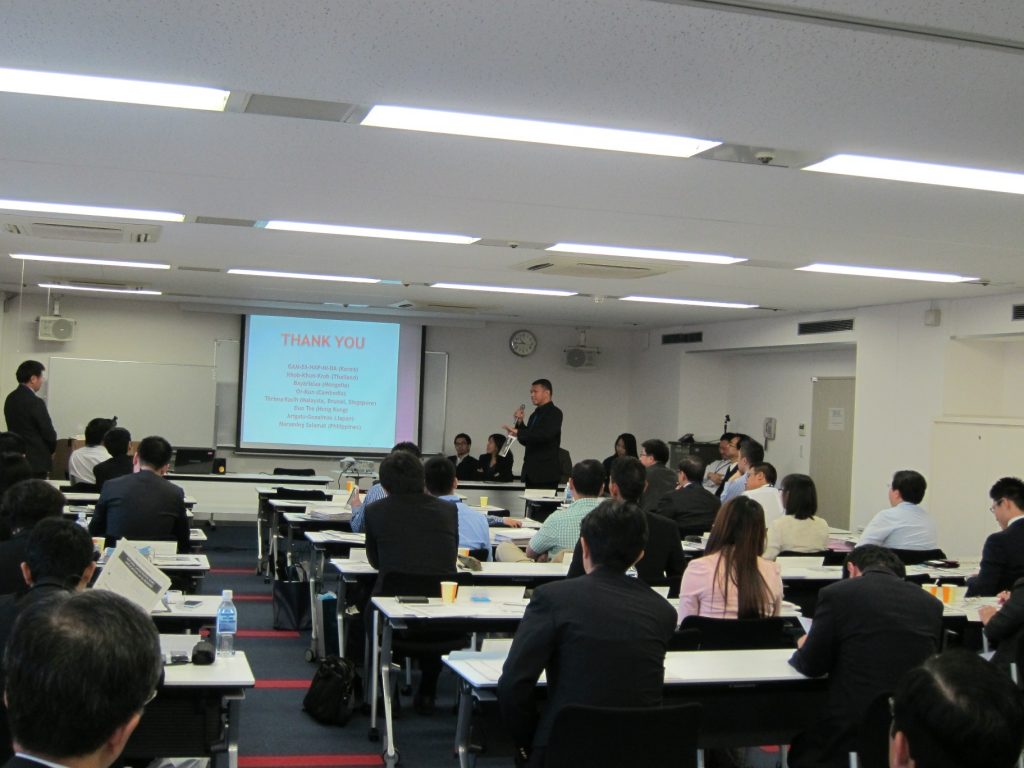 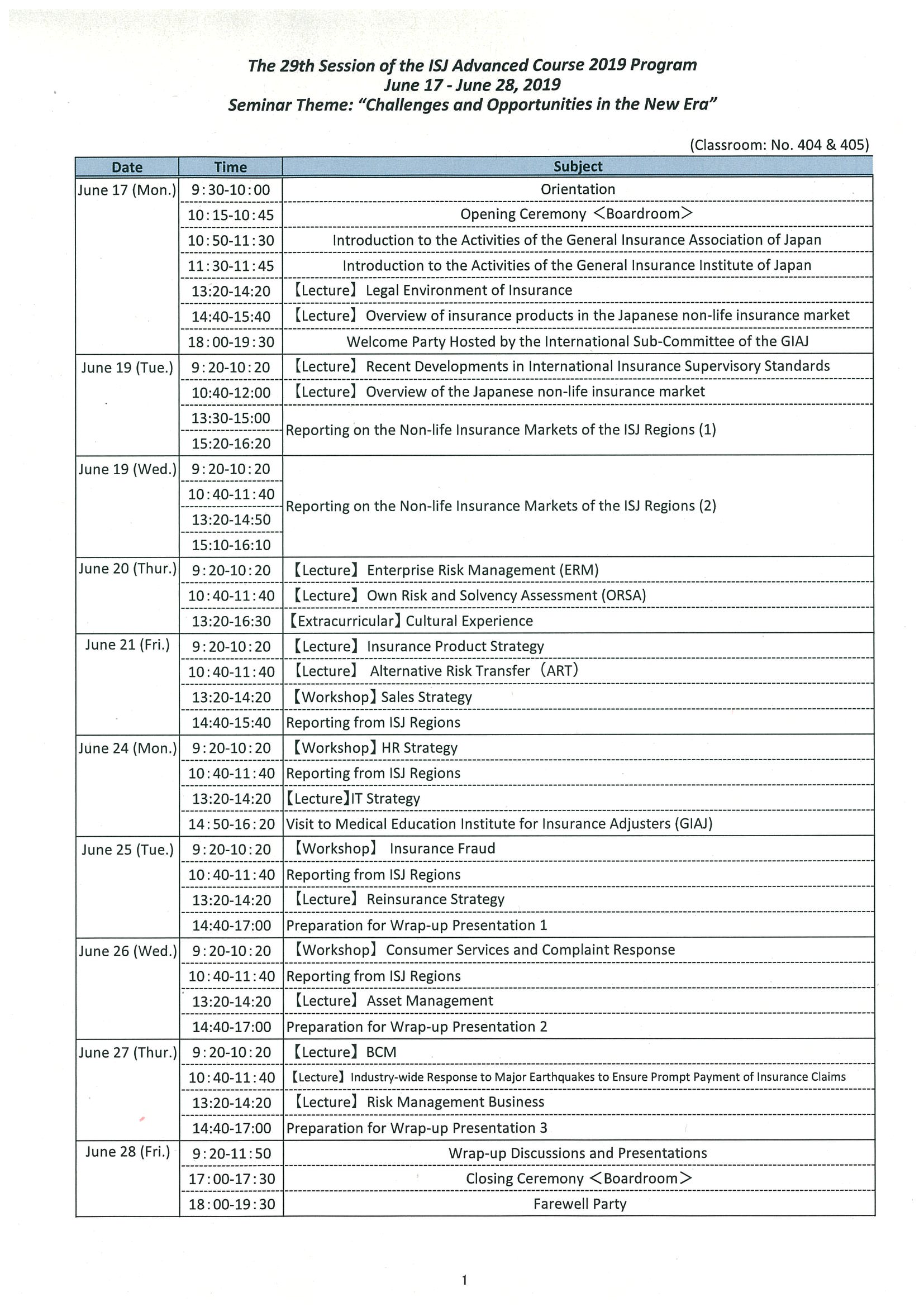 Program（Click to Enlarge or View PDF）

By the time the total number of graduates reached 470 at the 18th session in 1989, the reputation of the ISJ was already well established in East Asian insurance circles. However, some of the participating regions expressed their expectations for an advanced course wherein they could exchange information and opinions on specific and topical subjects through discussions.
Around that time, the Insurance Advisory Council, the advisory body for the Minister of Finance of Japan, underscored the importance of the international contribution of the ISJ and recommended in their reports that further efforts should be made to enhance the ISJ to respond to the requests of the participating regions.
In complying with the request by the participating regions and the recommendation put forward by the Japanese government, the Japanese insurance industry decided to launch a new course, entitled the ISJ-Advanced Course.The first course was held in May 1991 under the main theme "Insurance Industry coping with Changes in Needs". Since then, this course has been held annually in addition to the General Course.
Currently, the course theme is “Challenges and Opportunities in the New Era - Creating a sustainable growth strategy in a rapidly changing environment”. Participants will learn about the various issues of the non-life insurance industry both in Japan and in ISJ regions, success as well as failure, ERM, corporate management strategy, HR strategy, product/customer strategy, DX strategy, etc.
Between its inception in 1991 and the 31st session in 2021, 641 participants from 15 regions had graduated from the course.
Due to COVID-19 related travel restrictions, the 31st session was held online in July 2021. 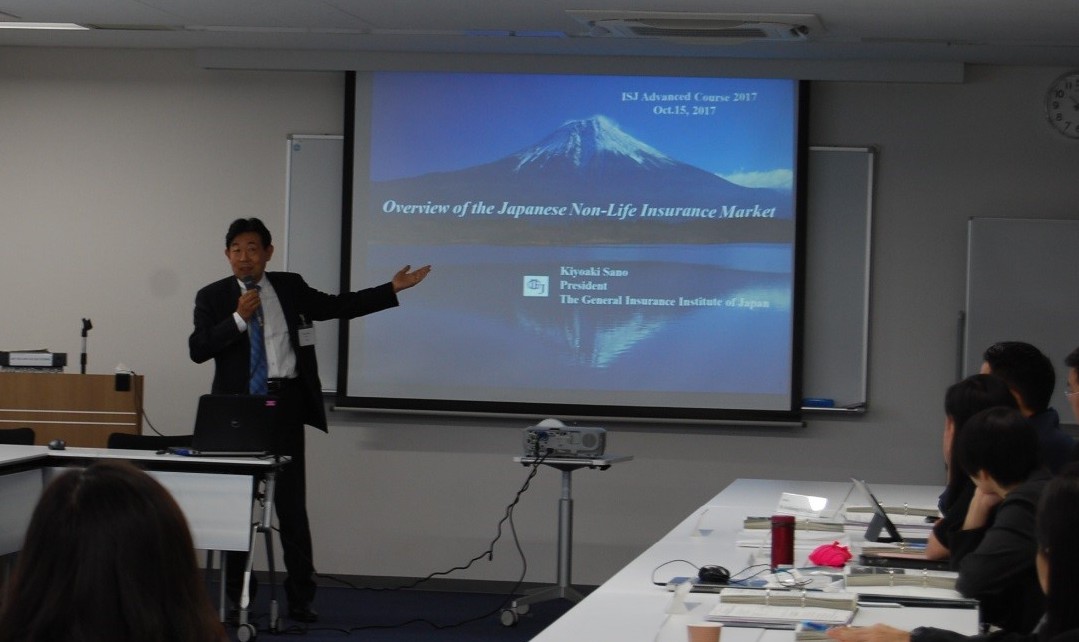 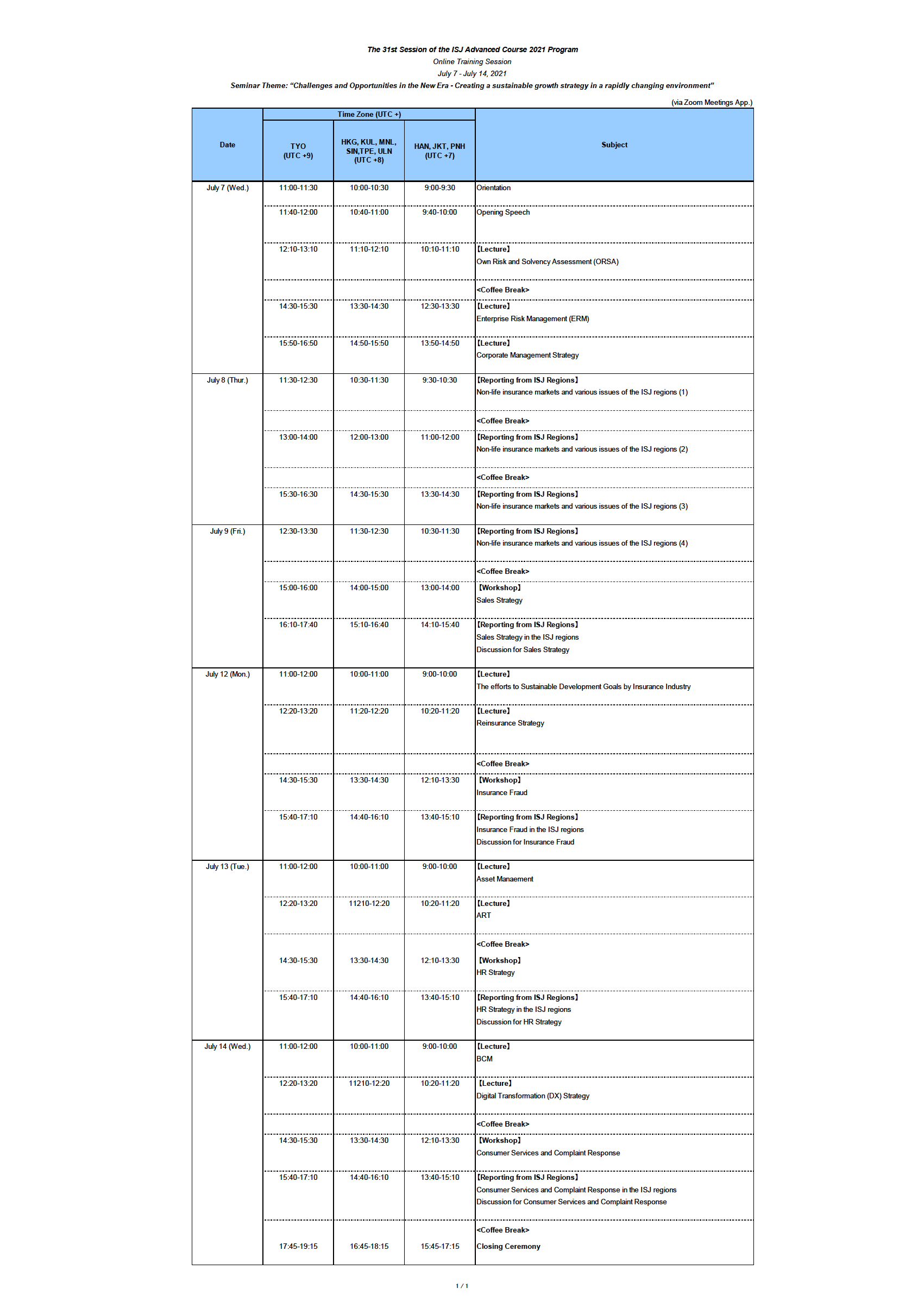 Program（Click to Enlarge or View PDF）

Around the end of 1992, the subject of "Promotion of International Exchange" was tabled for discussion at the Association. It was resolved to launch another ISJ course, entitled the "ISJ-Overseas Seminar", to be held locally in the East Asian regions.
It was started in 1993 with the aim of providing information on subjects that regional insurance markets are interested in acquiring from the Japanese market. One or two places are selected each year as venues for the seminars which are organized with the help of each regional non-life insurance association.
The topics of seminars are chosen according to the needs of the regional markets in collaboration with local co-sponsors. Staff members of insurance companies with expertise in these areas and the institute's staff are sent from Japan as lecturers and coordinators.
Due to COVID-19 related travel restrictions, the Overseas Seminar 2020 for insurance industry professionals in Vietnam was held online in an on-demand format.
Since its inception in 1993 to its 27th session in 2020, 5,664 participants have attended the seminars.